As I said in my previous post on Alice (Alice, the Caterpillar, and the Serpent), Lewis Carroll used asterisks to denote metamorphoses in Alice. The last row of asterisks in Alice’s Adventures in Wonderland was when she shrunk back from a serpent to a reasonably-sized girl at the end of Chapter V. This sudden absence in transformative asterisks suggests that Alice is beginning to gain confidence in herself and to settle into the Alice she will be. 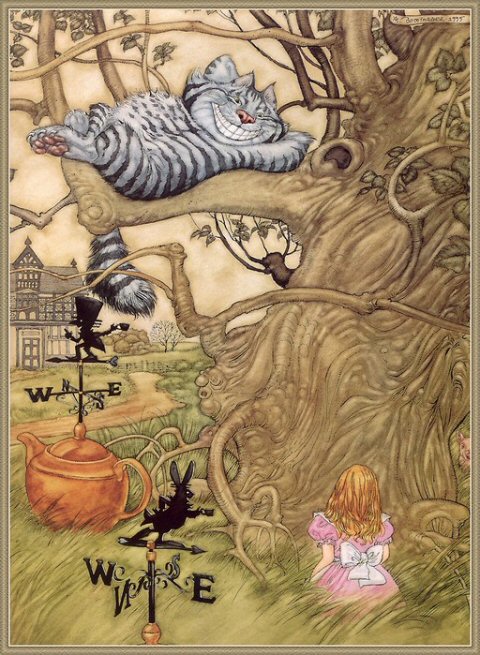 Angel Dominguez
Chapter VI introduces another well-recognized icon of the Alice books: the Cheshire Cat. The conversation that commences is probably the most sensible she has in Wonderland. Alice asks:

“Would you tell me please, which way I ought to go from here?”

“That depends a good deal on where you want to get to,” said the Cat.

“I don’t much care where–” said Alice.

“Then it doesn’t matter which way you go,” said the Cat.

Alice, in her newly acquired perfectly-sized body, is now feeling ready for an adventure. But she doesn’t know where to find one. The Cat, in the guise of nonsense, sensibly points out that if she doesn’t have a goal, she’ll be wandering aimlessly through life. This prods Alice into a decision–she’d like to meet more creatures in Wonderland, but she doesn’t want to “go among mad people.”

The Cat is the only creature of Wonderland who recognizes that he’s mad! This self-awareness allows him to sensibly see the rest of the world as it really is–mad. I believe that, like the Caterpillar, the Cheshire Cat is Alice’s alter-ego. He represents the sense, self-confidence, and goal-orientation that arises from self-awareness. After meeting the Cat, Alice marches right up to the Mad Tea-Party and sits down despite the party’s calls of “No room! No room!” Later, in the Queen’s croquet ground, she stands proud and erect as the queen’s procession nears. Her companions lie quaking face-down in the dirt. The Queen interrogates Alice:

“Off with her head! Off with–“

“Nonsense!” said Alice, very loudly and decidedly, and the Queen was silent.

Ever since meeting the Cat, Alice does not need to be over-sized to have self-confidence. Her responses to the Mad Tea-Party and the Queen are quite sensible and self-assured. Earlier in the book, Alice’s self-confidence fluctuated with size. But the self-assurance she demonstrates at the end of the book is unlike the childish spats she had when she was over-sized. Think of the incident in Chapter IV, where she was stuck in the White Rabbit’s house. Instead of sensibly standing up for herself, as with the Queen, she simply used her bulk to terrorize the White Rabbit and poor Bill.
Alice also demonstrates a mature self-assurance when she bursts out laughing (twice) in the Queen’s croquet ground. Earlier in the story, Alice’s main emotions were tear-soaking-frustration, foot-stomping-frustration, timidity, and confusion. Now that she is self-aware, she can see the rest of the world as it is–amusingly silly.
*Images were taken from:
http://alicesillustratedadventures.blogspot.com/2011/04/chapter-5-advice-from-caterpillar.html

2 thoughts on “The Confidence of Alice”