This week’s Nonfiction November prompt given at Regular Ruminations is book pairings. 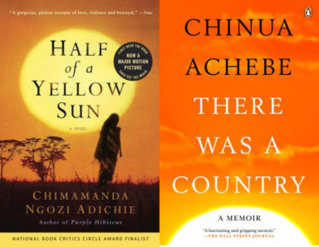 One obvious pairing that comes to mind is Chimamanda Ngozi Adichie’s Half of a Yellow Sun, and Chinua Achebe’s There Was a Country. Both of these books are about the Nigerian civil war of 1960-1963. The Igbo people felt that they could no longer live under the rule of the North because of no representation and persecution of their race. They seceded from Nigeria and called themselves Biafra. The war lasted from 1960-1963, when Biafra lost the war and rejoined Nigeria. During this time, there was a lot of ethnic cleansing and other atrocities on both sides.

Half of a Yellow Sun follows 3 characters: Ugwu, a village boy who is taken in by some politically-inclined academics as a house boy; Olanna, Ugwu’s mistress and a rich heiress; and Richard, a British expat who desperately wants to be accepted by the Biafrans as one of them. The stories of these three characters are superbly and tragically woven together on a backdrop of war, racial hatred, and famine.

This is one of the most impressive books I’ve read in quite a while. The characters were so deep that I felt I knew them. The events described had an eerie realism to them that comes from the author’s intimate knowledge of the history and people. This is one of those books that makes you feel like every incident described is important and well-planned. This is a story not only of war, but of people–their dreams, their loves, their fears, their strengths and weaknesses. Half of a Yellow Sun is a must-read for anyone interested in international literature.

(Those two paragraphs were stolen from my review on the old blog in July of 2012.)

I have not had the opportunity to read There Was a Country yet, but it is the memoir of Chinua Achebe, social activist and author of Things Fall Apart. This book is the story of Achebe’s experience during the Biafra war. It’s been sitting on Mt. TBR ever since it was released.

I thought I’d add in a NF/NF/NF pairing as well, since it’s one that I’ve been considering. Lawrence in Arabia and From Beirut to Jerusalem are both histories of the Middle East. Seven Pillars of Wisdom is T. E. Lawrence – Lawrence of Arabia’s – memoir of his time spent in Arabia during WWI. I own two of these books, but am too intimidated to start on this journey.

Maybe I’ll make it a goal to read these non-fiction books – and perhaps re-read Half of a Yellow Sun before next year’s Nonfiction November. I could even do a readalong of these books, if anybody would like to join in. Though I know all of them are pretty intense and “read like a textbook” which is something that I’ve seen complained about by many participants of Nonfiction November. So I doubt I’ll get any takers.