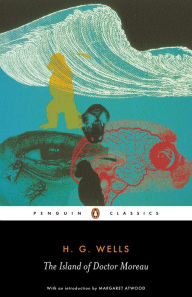 Summary: Mr. Prendrick is stranded on a strange island with two people – the drunken and uncaring Montgomery and the enigmatic, violent Doctor Moreau. As Prendrick begins to discover the mysteries of the island, he feels more and more danger to his life.

My thoughts: Wells’ stories are so deep and thoughtful. He explores his unique belief system in a way that is inspiring and energetic. I love his allegory, I love the plot, and I love how much this book made me think.

Well-Educated Mind Analysis (SPOILER ALERT): Even though this book is not one of those suggested by Bauer’s The Well Educated Mind, I’m using her outline of questions to analyze this story:

Predrick’s landing on the island is the most central life-changing event in the book.

I can sympathize with all characters in that they are well-developed enough that I understand what their motives are. Prendrick is motivated by a will to stay alive, no matter what. Moreau by a desire for great discovery. And Montgomery is simply controlled by forces more powerful than himself.

The Island of Doctor Moreau is a fable in that it has fantastical elements, and a chronicle in that it supposedly takes place to a “real” character in the “real” world.

If the novel is a chronicle, how are we shown reality: Physical? Mental?

This story is told mainly through the observations of the physical reality around Prendrick.

If the novel is a fable, what was the intent? Is it an allegory? If not, is it speculation?

To me, this story has two major allegories: The beastly nature of man, and the devolution of God as science emerges, and the fact that this can have terrible consequences.

The first allegory is first seen in Montgomery’s boredom with whether or not he saves Predrick’s life. Montgomery is an apathetic man who is motivated by nothing but the chaotic world around him. Just as beasts most generally are. Moreau epitomizes the beastly nature of man by not caring about the pain he inflicts on his victims – he is motivated solely by his own interests. Even Prendrick’s motivations are animalistic in nature – he is motivated by survival. But it’s not just the characters that show the animalistic nature of man in this story. It’s the events. The “men” of the island started out as animals, they struggled for years against their animalistic urges when they were “men,” but those urges were always there, and then, when there was no god to keep them in order, they regressed back into animals.

The second allegory, the devolution of god, develops when Prendrick is first visiting the beast people and they begin to recite the Law – building up Moreau to be a god. It shows how beasts with a mind (i.e. men) can build up a god in their head based on their fear and sense that there must be some punishment to not follow their values. Then, when Moreau dies, the beast people realize that god is mortal; that there is no reason to obey the law. They therefore descend again into bestiality. This suggests that the state of religion in modern times, as a result of an understanding of science, is falling apart. Religions, as they stand, don’t fit the needs of the people any longer, and without a god, there is no reason to keep a moral law and we become beasts.

This fits a statement made by H. G. Wells in The Fate of Homo Sapiens: “there is no creed, no way of living left in the world at all, that really meets the needs of the time… When we come to look at them coolly and dispassionately, all the main religions, patriotic, moral and customary systems in which human beings are sheltering today, appear to be in a state of jostling and mutually destructive movement, like the houses and palaces and other buildings of some vast, sprawling city overtaken by a landslide.”

As I said earlier, Prendrick was motivated by a desire to survive. Ever since stepping foot on the island, every decision he made was one which took into account his own personal safety. There were many dangers (real of imagined) that he faced. Would Doctor Moreau torture him like he tortured these animals? Would the beast men eat him alive? Prendrick’s first attempt to escape was run into the island, but that was before he realized what kinds of dangers inhabited the island. After Moreau and Montgomery were killed, he protected himself by trying to uphold the law in the eyes of the beast-men. When he discovered that without their “god,” they were descending into beasts again, he built a raft to float away from the island.

The person telling the story is Prendrick in the first person. The prologue to the story provided some “historical” evidence that the story was, indeed, truthful; though the fact that this evidence had to be presented in the first place seeded doubt in the minds of the readers. Overall, I’d take the story as literal (though fictional) truth.

👽Where is the story set?

The story is set on an island, mostly natural but with some human construction. The wild untamed natural part of the island where the beast people lived represents the real world of humans. It is something to explore, something to get to know, something that can be dangerous if not understood. The huts that the humans lived in (called The House of Pain by the beast people), represented the structure in which god currently resides – i.e. the House of Pain represents the world religions in which we house our beliefs in god. However, as soon as the beast people realize that these structures can be destroyed and therefore have no power over them, the beast people no longer feel compelled to obey the law (their morals).

👽 Beginnings and endings. Does the beginning sentence/scene come with meaningful imagery that represents where the story is going? Does the end have a resolution or a logical exhaustion?

The first sentence is a detailed and precise description of what happened to Prendrick’s ship when he was originally marooned. This is provided as evidence to say “what is about to take place is true.”

The ending chapter of the story entitled “The Man Alone” shows the state of man as Wells presumably saw it. That man is degrading to a beast because the world religions are no longer enough to keep our values safe. As Prendrick says:

“Then I look about me at my fellow men. And I go in fear. I see faces keen and bright, others dull or dangerous, other unsteady, insincere; none that have the calm authority of a reasonable soul. I feel as though the animal was surging up through them; that presently the degradation of the Islanders will be played over again on a larger scale.”

👽Did the writer’s times affect him?

Wells lived in a time where the theory of evolution was having a powerful impact on the way people saw humanity. Eugenics was taking off and people were asking the questions: “Are there different stages of humanity in which some are more evolved than others?” “Are there people who are more ‘fit’ and therefore more deserving of survival?” These are huge moral questions that, before, were left for God to sort out.

This is a hard question for me. I am a Catholic, so I am part of an organized religion which Wells apparently scorned. However, I do believe that organized religions did not keep up with the needs of its followers. We are stuck in a world in which there are so many reasons not to believe in God, and those reasons are mainly due to the rigidness of organized religions. Because of this doubt, it is easy to let our values slip because we doubt that anyone is watching or that there will be consequences to our actions. In that way, we may become beasts – driven by animalistic pleasures and not by a higher moral ground. Then again, I know plenty of atheists who have a very good value system (by my standards) as well as many who do not (again, by my standards). So it remains to be seen whether humanity will win out, or if the beasts inside of us will.

2 thoughts on “The Island of Doctor Moreau, by H. G. Wells”