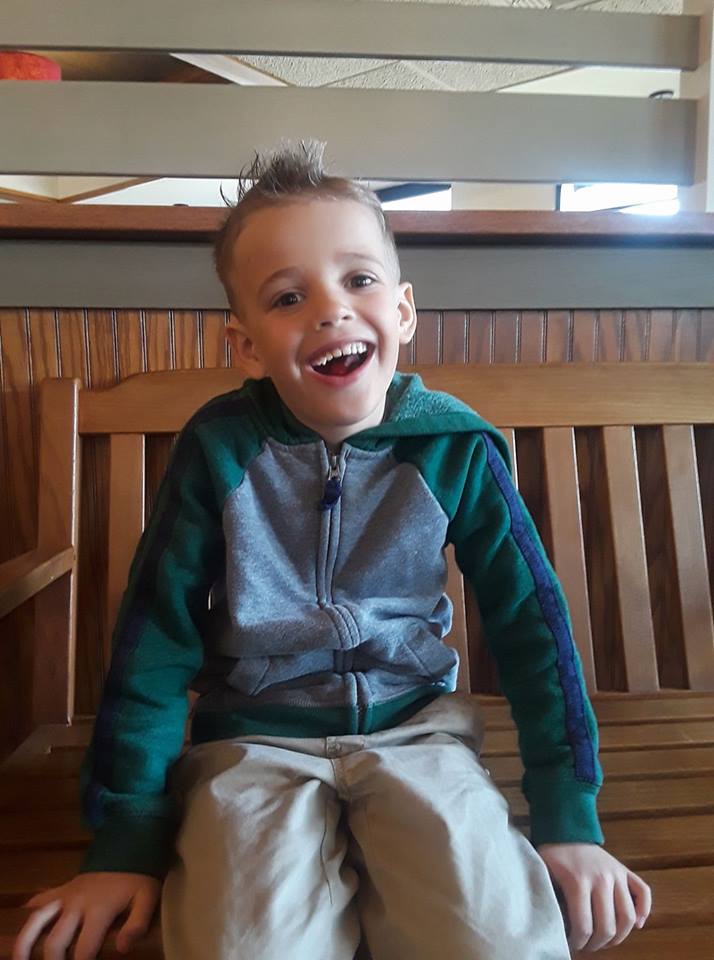 Morning everyone! This was a good week, though I was still a bit fatigued. At least I caught up on blog comments and hope to do some blog hopping today.

On Sunday, the family went to the Minnesota Zoo, though we couldn’t figure out where to find their special exhibit of baby farm animals. (I assume somewhere at the farm?) M and D had two more Tae Kwon Do private lessons, and they’re moving to regular classes with other people next week. M had a haircut (it was getting rather shaggy), which you can see above.

This weekend we are switching the kids to 2 hours a day of screens total instead of letting them earn screen-time by the hour, which was our new rule a little over a month ago. (They are disappointed, but now M is standing over my shoulder reading this because it’s like looking at a screen. He’s slowly reading it back to me aloud as I type.) They are addicted to screens to the point of it being an unhealthy behavior, and the earning time only gave them another way to obsess about screens. 😦 The first thing they’d say in the morning is “I read this morning before getting out of bed, did I earn more screen-time?” While at the zoo, they say “does the zoo earn more screen-time?” Constantly. All day. We decided that the option to earn screen-time was only feeding their addiction rather than finding a healthy alternative.

Yesterday I participated in Dewey’s 24 hour readathon but only managed to read from 7am to 4pm. At that point, my dad called and said he was bored, could he come over for dinner? How can I say no to that? So we all went over to Perkins for dinner. We sat around and chatted after dinner, and when my parents left, I didn’t feel like squeezing in another couple hours of reading. A and I watched Galavant instead.

D had her VERY FIRST EVER sleepover at a friend’s house on Saturday night, which she reminded us of daily for an entire week. She was pretty thrilled. She hasn’t returned as of 7:45am Sunday morning. 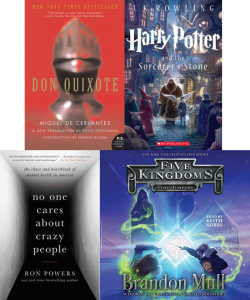 Despite what I said last week, I gave up on Freeing Your Child From Anxiety this week. I felt that the book wasn’t helpful to my situation since we can’t really get D to talk about her anxiety, which is a required step for the book’s strategy. So I was finding the book rather boring. I picked up No One Cares About Crazy People, by Ron Powers as my nonfiction replacement.

Since I was in a reading slump, I also decided to give up on And I Darken and pick up Harry Potter and the Sorcerer’s Stone. I got most of the way through it, and will happily finish my first book in quite a while this upcoming week. 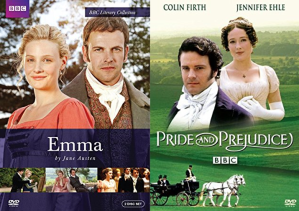 Despite it being a better week, I didn’t finish any new books (probably because I gave up on two). But I did watch the BBC miniseries of Emma with D and the BBC miniseries of Pride and Prejudice with A. Both liked the movie much more than I would have expected. I should try D out on more Austen and see if it was a fluke. She may have liked Emma simply because she thought the character was fantastic and knew everything. In other words, I think she wanted to be Emma. 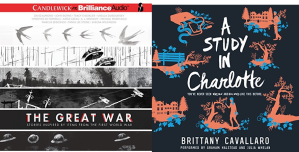 Audiofile has a program called Sync where two free teen audiobooks are provided each week. These books are available to anyone with Overdrive (which is a free app) on their phones or tablets. The Great War and A Study in Charlotte are free until 5/3. 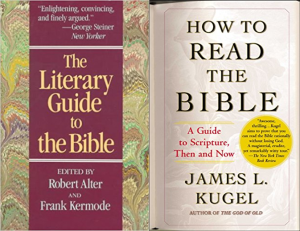 For my Bible reading, I finished the first chapter of How to Read the Bible, by James Kugel (notes upcoming) and the introduction to The Literary Guide to the Bible (this is too dense to write interesting notes for, but it is still worth reading).

This is posted in The Sunday Salon and Caffeinated Reviewer’s Sunday Post.