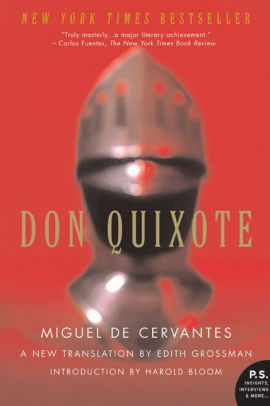 Summary: When Don Quixote goes insane and decides that he is a knight errant, he adopts a simple-minded friend to be his squire and they sally forth into the world to right all wrongs. He has many misadventures due to his tenuous hold on reality.

My Thoughts: This was an incredibly difficult book for me to read. I have wanted to read Don Quixote for a long time, ever since falling in love with the soundtrack for Man of La Mancha. However, I have made 4 failed attempts to get past the first half of the book. This time, I finally prevailed.

The first part of the book was very difficult for me because the story of Don Quixote and Sancho was interspersed with way too many very long side stories about other (often unimportant) characters. Frankly, I found it boring, but I SO wanted to know how the story ended.

The second half of the book was actually much easier to read because it covered the story of Don Quixote and Sancho without developing any unnecessary characters or reading any unnecessary love letters/novels. I’m glad that, in the end, I stuck with this book and finished it up. 🙂

The following is my analysis adapted from Susan Wise Bauer’s The Well Educated Mind’s description of how to think about a novel. It will have spoilers.

There are two central life changing events in Don Quixote. The first is when he goes insane at the beginning of the novel. He begins to think he is a knight errant, and he sallies forth to right all wrongs. The second life changing event is at the end of the book, when he suffers defeat at the hands of another knight, who tells him to go home. After this event, Don Quixote begins to see ever more clearly that he has been living in a fantasy world.

In the second half of the book, yes, I was transported. The first half, no. I think the purpose of this book was to make people laugh and to parody books of chivalry rather than to engross people in a deeply engaging story.

I do sympathize with both Don Quixote and Sancho. I feel bad at how Don Quixote is taken advantage of and made fun of throughout the book – especially during the second half. Don Quixote only wants to right wrongs (and to be the most valorous night in history, of course), and he is kept from his goals by his unrealistic views of the moral values of others in the story. Sancho, on the other hand, isn’t only out for his self-interest – no matter what he keeps saying – he clearly loves Don Quixote and would follow him to the end of the world. He just wants to be able to talk a lot while doing so.

This story is supposed to be a “true history,” and should therefore be considered a chronicle. It follows the “true” life of Don Quixote from the beginning to the end of his madness.

The next question is: If the novel is a chronicle, how are we shown reality: Physical? Mental? But how do I even answer that? Are we shown reality at all? Sometimes, through Sancho, we can get an idea of what’s going on, and sometimes the narrator tells us what’s going on. But often, we just hear Don Quixote’s words, which we know aren’t a reflection of the “true” reality. But it is real to Don Quixote. Therefore, I’d say we see reality though both a physical and mental lens.

Don Quixote wants to right all wrongs and to become the most valorous knight in history. His own madness is standing in his way. He sees things not as they are, but as he wants to. For instance, when he “helps” the boy who is being beaten by his boss, he takes the evil man’s word that he will “give the boy what he deserves.” Don Quixote thus abandons the boy to a worse fate than he’d have had if the knight errant hadn’t intervened. This is because Don Quixote views everyone else as having the same moral sense of right and wrong as he, himself does. But he is using an antiquated moral sense that no one shares with him.

Don Quixote never overcomes this block, other than to realize that he is mad, and then to die.

This story is generally third person limited, though there are times of omniscience, and other moments of first person when Cervantes talks about his own adventures trying to get this history written. No, I don’t believe the narrator is reliable, especially in the first half of the book. He seems to have a prejudice to be too kind to Don Quixote. The second half of the book has a much more reliable narrator, though it seems that Cervantes wasn’t himself the narrator of that section, rather it was a fictional historian.

👽Where is the story set? Is it natural or human constructed? If natural, does nature reflect the emotions and problems of characters? Or is the universe indifferent?

The story is set in the lands surrounding La Mancha, Spain. This is a natural environment, and nature does (sometimes) reflect the problems of the characters – as when it gets very dark on the night of the adventure of the water mill. But this was in the first half. In the second half, I’d say the universe is indifferent.

👽What style does the writer employ?

The style is humor narrative.

👽Images and metaphors. Are there any repeated images? If so, is this a metaphor, and if so, what does it represent?

The images that are most often repeated are descriptions of how scrawny and long-faced Don Quixote is. Perhaps this was just for reality’s sake. But to me, it represented the wasting away of mental illness in a time when there was little sympathy for the mentally ill.

The other image that was very common was that of the inn. In the beginning, Don Quixote always believed that the inns were castles, but as his madness waned, he realized they were inns. I think they were meant to show us just how mad Don Quixote was at any given time.

👽 Does the end have a resolution or a logical exhaustion?

The logical exhaustion of the story is when Don Quixote becomes self aware and realizes the gravity of some of his mistakes.

👽Do you sympathize with the characters? Which ones, and why? Did the author choose characteristics to make a statement about the human condition?

I sympathized with both Don Quixote (who was mad and treated poorly by many people, though treated well by others) and with Sancho (who was treated well only by Don Quixote, and then, only sometimes). I think the “human condition” point that Cervantes was trying to make (other than just making fun of books of chivalry) was that people’s worth should not be judged by their status in life, but by their deeds and intents. The Duke and Duchess were horrible people – cruel to Don Quixote and Sancho. But Sancho, despite being a fool, was a wise and fair governor.

👽Did the writer’s times affect him?

I think the main argument is as I said above, a person’s status does not reflect the quality of that person as a moral human being. And, yes, I totally agree.