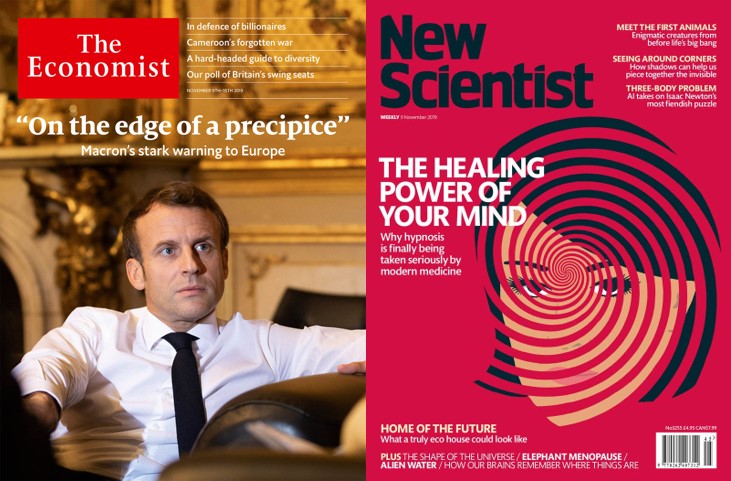 I noticed an interesting commonality in the New Scientist and The Economist a couple weeks ago: they both had articles about genetic modification.

The New Scientist (November 9, 2019) article entitled Spray-on CRISPR described how scientists are creating “better” crops by coating nanoparticles with CRISPR DNA and spraying it on plant leaves. The DNA then enters almost all the cells that it comes in contact with, and codes for genes which are desirable. I’m not a GMO avoider by any means, but I do wonder what kind of impact those nanoparticles will have on creatures that eat the plants? Will we incorporate the DNA into our cells too? The article said this effect is unknown and will have to be further studied.

The Economist (November 9-15 2019) had an article entitled A Design for Life about using a new form of genetic profiling, single-nucleotide polymorphism (SNP), to check the DNA of potential babies that can then be implanted in vitro in human mothers (IVF). They could make sure the potential baby didn’t have any genetic disorders. Furthermore, they could code for less tangible aspects like intelligence, athleticism, etc. The author suggested that this, compounded over generations, could produce a super-race of humans like in the movie Gattaca or the alphas in Huxley’s Brave New World. Not exactly a world we want to see, right?

But there are potentially good things that can be done with genetic engineering sometime soon, too. For instance, I read an article By Pam Belluck in the New York Times on November 4, 2019 entitled, Why Didn’t She Get Alzheimer’s? The Answer Could Hold a Key to Fighting the Disease. It was discussing a woman whose family carried a gene for early onset Alzheimer’s. But one of the family members never got dementia. It turns out that this woman has another mutation that counteracts the dementia gene. Could CRISPR or other technologies be used to help avoid Alzheimer’s? Furthermore, there was an article in New Scientist back on July 4, 2019 entitled Exclusive: Five couples lined up for CRISPR babies to avoid deafness. I wonder what the Deaf Community feels about this, given how tight-knit they are? Of course, some people may make the choice to let their child live an easier life by not being deaf in the first place, even though they’re losing out on that community. But where does it stop? Could people use CRISPR to, say, code for heterosexual offspring to make sure their lives are as easy as possible? (This said with the understanding that many people in the LGBTQ+ community have very difficult lives.) Is it a parent’s choice to decide what sort of communities they want their children to belong to?