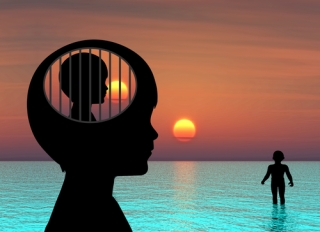 Suicide is a huge issue that is extremely stigmatized and ignored. It ranks among the 10 leading causes of death in most Western countries – and the number of suicides is likely higher than estimated since many deaths are ruled “accidental” rather than being given the stigmatized label of “suicide.”
Suicide is a huge tragedy. Many people label it as “selfish” – but those people don’t understand that when someone is in the state of mind in which they would commit suicide, they are severely mentally ill; they think life is hopeless and see no way out; they often think that people will be happier and more successful without the burden of knowing the suicidal individual. Another tragedy is that many “survivors of suicide” – that is the families, friends, and even acquaintances of suicide victims – are often traumatized and blame themselves for not noticing the signs; not being there when they were needed the most.
Although in the past people who attempted / completed suicide were between the ages of 25 and 45, there is an appalling trend of teenagers and elderly men who are now killing themselves. Women are more likely to attempt suicide, and men are more likely to complete suicide. This is because, at least up until now, women tend to use “less messy” or “romantic” – and therefore less dangerous – ways to kill themselves. Men, on the other hand, generally choose guns. However, from reading the news, I personally believe that the number of women who use guns in suicide attempts are dramatically increasing.
At this time, the highest rate of suicide completion is elderly males who are widowed or divorced or have terminal illnesses. This may be because men of that era were taught to hold in their emotions rather than express them. Thus, they are less likely to seek help when suicidal thoughts arise.
As much as 90% of individuals who attempt/complete suicide are mentally ill at the time. Major depression is the highest predictor of suicidal ideation, but people with impulsivity disorders – such as borderline personality disorder or bipolar disorder – have a higher rate of attempt/completion.
The rate of suicide attempt/completion for people between the ages of 15-24 has tripled between the 1950s and 1980s. Suicide is the third most common cause of death (after accidents and homicide) of people between the ages of 15-19. It is unclear why the rates of suicide has increased in teens and young adults, but it may be because of increased drug and alcohol use, and perhaps use of antidepressants which often increase suicidal ideation in teens. Young adults in college seem particularly susceptible – this seems to be due to academic pressure, though those who commit suicide are generally doing quite well academically; therefore it is thought that the anxiety of perfectionism or fear of disappointment may be a leading cause. Teen suicide hotlines have become increasingly popular in the past years. I volunteer at one called TXT4LIFE, in which a teen or young adult can text the word “LIFE” to 61222 and have a text conversation with someone who will hopefully deescalate them. There are also websites, including this one, that provide further suicide hotlines for teens.
Many people who commit suicide are ambivalent about wanting to die – this is likely why they call suicide hotlines. Although, I must admit, even indirectly insinuating that a texter might feel ambivalent in my volunteer work only encourages them to say how much they really want to kill themselves.
There are three basic ideation types that occur in people who attempt suicide. Most people are ambivalent. These are often women or teens who are attempting to send a message about their state of mind. These people generally use a non-lethal means of suicide attempt – such as ingesting a small amount of pills, a bottle of not-so-dangerous pills, or minor cutting. It is thought that Sylvia Plath, who died by sticking her head in the oven, had expected a friend to stop by the house shortly after she attempted suicide; thus saving her from an actual death. A small minority of individuals seem to have no ambivalence at all, and tend to use “messy” paths to suicide, such as guns or jumping. The third group leaves it up to fate. The figure “If I die, I’m meant to die. If I live, I’m meant to live. These people generally use more dangerous means to suicide like ingestion of large doses of pills or major cutting.
There is a myth that people generally do not leave hints that they are having ideation before attempting suicide. And there’s another unfortunate myth that people who threaten suicide seldom actually attempt. Both of these myths are false. Studies show that of people who committed suicide 40% made direct comments about suicide and 30% made comments about dying in the months leading up to suicide. Only 15 to 25% of people leave suicide notes, and they are often unclear as to what the reasons for suicide were.
Suicidal ideation is generally treated with mood stabilizing or antidepressant medications, therapy, and a large number of crisis hotlines. Unfortunately, there is little research to show whether these hotlines actually decrease the number of suicides. In his bestselling book Noonday Demon, Andrew Solomon even suggests that talking about suicide with the callers might increase the likelihood of suicide because it makes it seem like a viable option.

Most suicide hotlines are staffed by unprofessionals (like myself) who assess the gravity of the situation and either deescalate the individual or intervene by calling the police. I’d very much like to think these suicide hotlines are helpful. I know, at the very least, that they are help make the callers/texters feel better on an immediate basis, which makes them seem worthwhile to me.
This is a series of posts summarizing what I’m learning in my Abnormal Psychology course. Much of the information provided comes from reading my James N. Butcher’s textbook Abnormal Psychology. To read the other posts, follow these links:

2 thoughts on “Suicide – An Overview”