This was a stressful week, and I’m ready to start a new one and move on with life! Yay! A new week!
Here’s what happened: On Monday I was upset at work because I had to play the bad-guy and tell my employee that she might not be able to take her vacation on the days requested, despite having already bought the tickets. I told her she may have to reschedule, and she cried, and I felt awful. So I went shopping with my good friend, and I bought this awesome Chanel purse at Goodwill. I didn’t get much studying done, but I certainly felt better.
The next day, my employee texted me (it wasn’t her day to work) that her last day would be December 31st. I told her that she’d have to sign a resignation form on Thursday, when she returned. After a couple of stressful hours of trying to remake the schedule (which is already short one employee) work without her, she texted back “But don’t you WANT me to work for you?” Apparently, she’d been bluffing and hadn’t expected me to take her up on the offer to quit. I was enraged. Another night that I would rather just relax rather than study.
To cut to the chase, I ended up taking my test on Thursday without studying at all. It looks like I did ok, and am still going to be able to pull off an A in the class. So here’s to next week and studying for my final exam coming up on Thursday!

Well, I don’t really hang out on the web that much except for book-related stuff. But I guess the next best place is Netflix or YouTube. I’m trying to start reviewing more documentaries to add some spice to my blog. I’ve already started last week!

Living in a Gray World, by Preston Sprinkle
Lamb, by Bonnie Nadzam 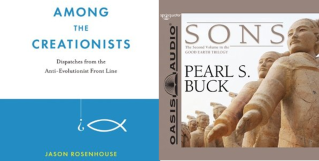 This update is posted to Feature and Follow Friday @Parajunkee and @Alison Can Read, Stacking the Shelves @Tynga’sReviews, Bought Borrowed and Bagged @TalkSupe,  Sunday Salon, Sunday Post @CaffeinatedBookReviewer,   @MailboxMonday, It’s Monday What are You Reading @BookDate