Hello after a vacation from making any posts at all! The picture above looks nothing like me, except the pregnant part. Especially since my weight loss goals were derailed first by a change in medication and then by becoming pregnant. But never fear! Someday I will get back down to my ideal weight! I have faith! If you’re interested, here’s my latest graph (which I find interesting because I like data). 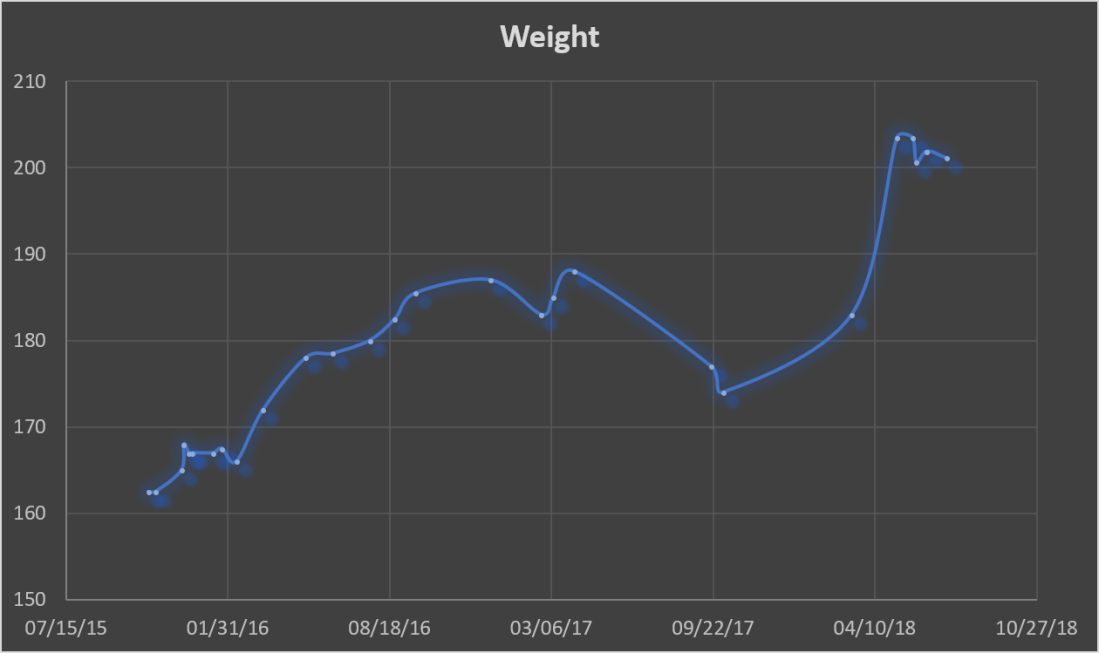 I’m eating plenty of healthy foods (my cravings lean mostly towards fruits and veggies – and in case you think that means I’m having a girl because you’ve been reading silly internet myths, it’s a boy). I have NOT been getting much exercise, though, because I first caught some nasty virus and then developed pneumonia. I’m on antibiotics now, so I’m slowly getting better. 🙂 Luckily, my mother-in-law is in town helping out while I’m on recovery, so the housework is still getting done.

The kids have been doing great ever since M went on his meds for ADHD. Though the other day he requested to be homeschooled. He seems to associate school with being “bad.” We’re trying to convince him that first grade will be so much better because he’ll have the meds and the new social skills he’s been learning. Regardless, I have been doing research into other options. I’m certainly not ready to maintain my own curriculum on such short notice, but the online public school system looks promising. I don’t suppose anyone has feedback about Connections Academy, do they? I have read the reviews, and they seem mostly positive, though there are certainly some negative ones as well. I guess it all depends on the kid and how she learns. I will be going to an information session next week to determine whether this might be a good choice for me. A is skeptical, but M’s mom seems open to the idea.

While we’re on the subject of school difficulties, does anyone have experience with dysgraphia? We are concerned that D may be showing signs, and will be watching her carefully next year. She has very distressing writer’s block, poor legibility, and poor spelling. Of course, she’s just entering the third grade, so this may just be her natural progression. But I was just wondering if anyone out there has had experience?

I’ve gotten to the point where I’m reading too many books at once again. It’ll probably fade away with time, but for now I’m re-reading the Harry Potter series for some light reading, Handmaid’s Tale for some more literary fiction, No One Cares About Crazy People as a general nonfiction book, The Explosive Child, which was suggested by M’s ADHD assessor (and now seems unnecessary since he hasn’t thrown a temper tantrum in a couple of months), and What to Expect When You’re Expecting, for obvious reasons.

M read two Scholastic Branches books to me recently. They are presumably above his reading level, as they appear to be aimed at second graders and he’s going into the first. But for the most part he’s doing great. I need to help him with a word every now and then, but that’s no problem. I’m so proud of him!

I finished the second Harry Potter book and started the third. And I watched Game of Thrones Season 1 with A and my nephew J. Yeah, we got J’s mom’s approval before subjecting J’s young mind to all that sex and violence – but apparently that’s the kind of stuff she watches with him. J is now addicted and has moved on to season 4 himself. Season 1 is as far as I’ve gone.

Also, if I am recovered enough from my pneumonia, I will participate in Dewey’s Summer Readathon on 7/27-7/28. Check it out.

This links up to Sunday Post at Caffeinated Reviewer and Sunday Salon (on FB).