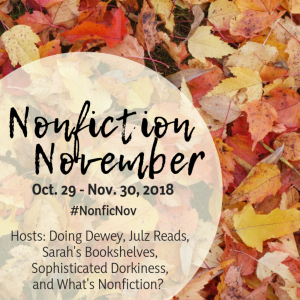 Nonfiction November is an annual celebration of Nonfiction. This year it is hosted by Julie (JulzReads), Sarah (Sarah’s Book Shelves), Katie (Doing Dewey), Rennie (What’s Nonfiction), and Kim (Sophisticated Dorkiness). The first prompt is today, and is hosted by Kim.

American Psychosis and One Flew Over the Cuckoo’s Nest

I really should read One Flew Over the Cuckoo’s nest given my interest in the failures of the mental health system – it’s a classic. And I loved the movie. It is about a narcissistic man who decides to plead insanity in order to get a reduced incarceration time – and what happens to him in the insane asylum. American Psychosis, if I remember correctly, even makes a vague reference to the book. It is about the failures of the American Mental Health system throughout its history.

Beyond These Walls and The Hate U Give

This one is the exception: I have read both of these books, though Beyond These Walls will not be released until January. It is about the failures of the American Justice system through history and (partly) about the incongruity between the ratio of minorities in America and the ratio of punishments (and brutalizations) they receive from the justice system. The Hate U Give, if you haven’t heard of it already, is a book everyone should read. It is about a teen who sees her friend shot by a police officer and must testify against the officer.

Killers of the Flower Moon and Mean Spirit

Killers of the Flower Moon is a True Crime book about the Osage murders of the 1920’s. Mean Spirit is a fictionalized accounts of the same murders, and it was nominated (though did not win) the Pulitzer Prize back in the ’90s. (Does that make it a classic?)