Charlie and the Chocolate Factory
Written by Roald Dahl and Narrated by Eric Idle
Reason for Reading: I’d watched the two movies with my nephew, who’d just read the book, and I decided that I wanted to know which one was more true to the book.
Genre: Children’s Fantasy / Humor / Adventure
Review

When Willie Wonka announces that he’s hidden 5 golden tickets to his fantasticly famous, but very mysterious, chocolate factory, Charlie Bucket wishes more than anything that he could be one of the lucky 5 winners. But Charlie is very poor and can not afford to buy any of the chocolate bars that conceal the tickets. Luck knocks unexpectedly, though, and he’s up for the adventure of a life-time with 4 other kids – each of whom has at least one huge personality flaw. Violet Beauregarde is uber-competitive and has a nasty chewing-gum habit, Veruca Salt is spoiled rotten, Mike Teavee is a know-it-all who watches too much TV, and Augustus Gloop is grossly overweight and incredibly greedy. As the eccentric Willie Wonka takes the kids on a wild tour of his factory, each of the kids suffers dire consequences of their flaws.
This is my FAVORITE Roald Dahl book. Hilarious and fun – and it has a classic movie that makes me even fonder of it. 🙂 I really enjoyed listening to Idle’s fantastic narration of the story – though I wish he’d sung the Oompa Loompa songs instead of just reading them. But no one’s perfect. 🙂 I think I enjoyed this book just as much as an adult as I had as a child.
My nephew and I compared the two film adaptations. The first was the Gene Wilder version from 1971 and the second was the Johnny Depp version from 2005. I hadn’t seen the classic movie for many years, but I had watched the newer one when it came out. I remember being disappointed in the newer version, but this time around I rather enjoyed it. Yes. It was different than the classic movie, but they were both very interesting interpretations. They both took some artistic license – and each had some stronger points and weaker points. The 1971 version, of course, inserted all that stuff about Arthur Slugworth (not to be confused with Horace Slughorn) and the 2005 version inserted all that stuff about Wonka’s father. Other than that, there were only minor tweaks to the story in either one, and I was surprised to realize that they both were equally true to the book, in their own way.

So, who’s my favorite Willie Wonka? I don’t know! That’s really hard to decide. The character was acted QUITE well both by Wilder and by Depp, though in very different ways. Wilder’s was eccentric in a crazy-scary sort of way. Depp was eccentric in a wacky-vulnerable-creepy sort of way. These were very different interpretations  but I was surprised to realize that they were more similar to each other in some ways than they were to the book character (as read by Idle). Both of Depp and Wilder (especially Wilder) seemed almost to encourage the nasty little kids to misbehave. Willie Wonka of the book seemed mostly unconcerned with the consequences of misbehavior, but seemed to genuinely warn them not to misbehave.

Charlie Bucket was cute in both movies, and the interpretations of the actors was fairly similar. I think Peter Gardner, of the 1971 version, sparkled just a tab bit more. Look at that cute expression when he finds the ticket. 🙂

Violet Beauregarde was modernized in the 2005 version. She was still the over-competitive gum-chewing brat written by Dahl, but she was the daughter of a win-or-die beauty queen and was totally kick-butt in a losing-isn’t-an-option-because-you’re-better-than-them sort of way. Basically, it’s making fun of a certain stereotype of over-competitive girls that didn’t exist when Dahl wrote the book. So, the Violet of the 1971 version was more true to the kid in the book, but  I could better relate to the stereotype portrayed in the 2005 version – and I think this modernization was spot-on with the message Dahl portrayed in his book.

Veruca Salt was cuter in the 2005 version, but she had SO much more attitude in the 1971 version. Look at that “I want it NOW!” face. Definitely a bad egg. 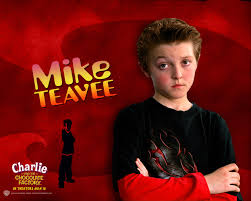 Mike Teavee was obnoxious in both versions. He was modernized a bit in the 2005 version – he was addicted to video games rather than TV – but their interpretations of the character were pretty similar and I don’t see any reason to think one did a better job than the other.

The Princess and the Goblin, by George MacDonald

This classic fairy-tale-style story is set in a land where the Goblins and Humans have had a “cold war” for many, many years. Long ago, the Goblins threatened that some day they will steal a princess…and their day finally comes when Princess Irene’s nurse accidentally keeps the Princess out after sunset. Luckily, they are rescued by a miner’s boy, Curdie – but now the Goblins know where the Princess lives and what she looks like. When the Goblins hatch a devious plot, Curdie and Irene become fast-friends as they act in turn as heroes. First and foremost, this is a fairy-tale. But it is also an allegory about faith. Princess Irene has a great-great-grandmother – a mysterious and heavenly woman that only she can see. Irene’s very-great grandmother gives the Princess a magical string and tells her to follow the string whenever she’s afraid – never doubting it or deviating from it, regardless of where it may take her. Irene must learn to have faith even when she thinks that the string has led her astray. And Curdie must learn to have faith in a very-great grandmother that he has never seen.  This is a sweet story, nice for reading aloud to young children.

Reason for Reading: This book won the Newbery Medal in 1930 and has been sitting on my shelf for years.

While sitting idly one evening in her antique shop, Hitty, a 6-inch-long doll carved out of Mountain Ash wood, decides to write her memoirs. She begins her narration with her birth into the brave new world of 1830’s Maine. Her little girl drags her on many adventures beginning first with their village and ending in a far-off land…where she finds a new owner. Follow Hitty’s adventures over a hundred years as she changes hands and lands and occupations. This is an adorable little classic of historical fiction for 8-9 year-old girls. The story is sweet and generally easy to read (though some of the historical references went over my head, and the book succumbed to the racial stereotyping common for books written around the turn of the century). I’m glad I finally picked this one up.

Call It Courage, by Armstrong Sperry

Reason for Reading: This book won the Newbery Medal in 1941. It’s been sitting on my shelf for years.

Mafatu is afraid of the ocean because he almost drowned when he was a boy. But in his culture, fear is scorned and laughed at. Mafatu feels that he must redeem his good name and prove that he is not afraid anymore. He climbs in a boat and goes on a voyage, but he soon finds himself shipwrecked on an apparently-deserted island. There, he keeps himself alive by making all of his own tools, weapons, and a new canoe. He battles a tiger shark, an octopus, and a boar. He defies the cannibals when they return to their island. But will he be able to return home? This was a cute book, and I enjoyed the adventure – though it’s very short and all the adventure is packed in at a very unrealistic pace. Regardless, I really enjoyed the couple of hours I spent with it. I think a young reader might find this book fun. It’s appropriate for someone reading at maybe the 3rd grade level.