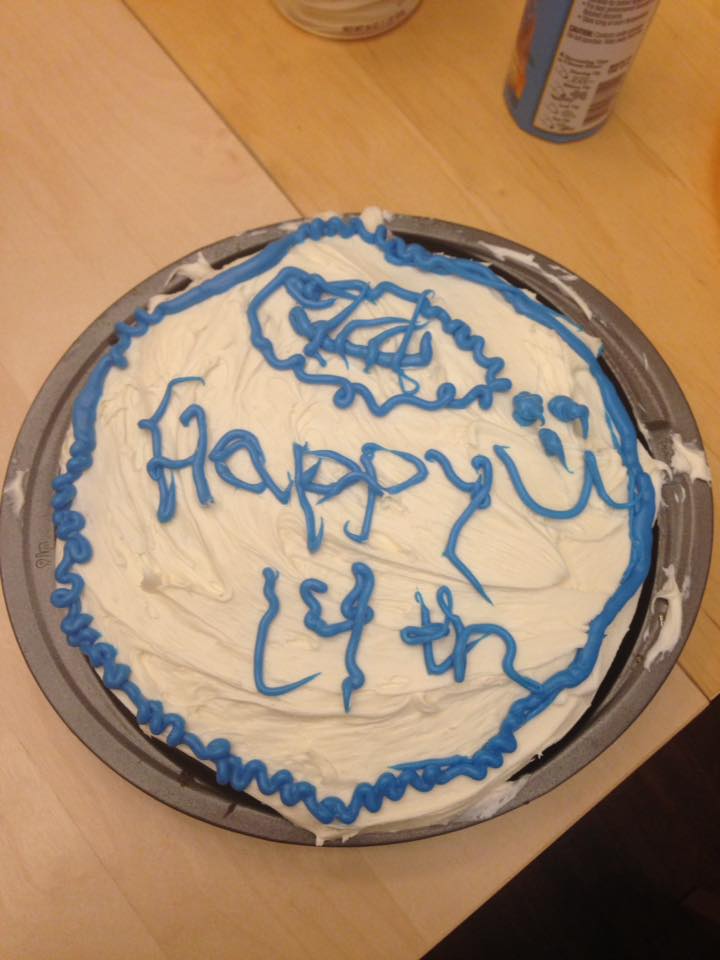 This week was my nephew J’s fourteenth birthweek. (We’re not quite finished celebrating, as my family, my sister’s family, and my parents will all go out to dinner to celebrate on Monday.) My step-daughter-to-be D baked him this lovely cake, which I decorated with my mad frosting-writing skills.

Saturday my fiancé (A), best friend (L), J, and I played D&D together. Mainly character building. I’m a Dragonborn Cleric, L is a Halfling Ranger, and J is a Dragonborn Fighter. A is Dungeon Master. This is J and my first time playing. We’ll be meeting every first Saturday. We also watched the first 5 episodes of Series One of the new Doctor Who.

Today I will have a book club meeting to discuss Shadow Land, by Elizabeth Kostova. Review is still upcoming, though I have to say that I found it rather meh. I wonder what everyone else thought?

On last Sunday, we had our family night, where we ate pork chops and played our first-ever game of Cadoo, which is a children’s version of Cranium. It was quite a bit of fun. I finished listening to Caesar’s Last Breath, by Sam Kean, which will be my next book club book in two weeks. J, A, and I watched The Wolverine on Friday night, and found it fairly palatable. Much better than the other Wolverine movie! Wow. This week, I acquired quite a few goodies.

I bought the Goelet translation of The Egyptian Book of the Dead, which is the second book on Harold Bloom’s Western Canon which I will probably not finish in my life-time, but it’s still fun to use as a guide. Actually, I believe Bloom suggested Budge’s translation, but from doing a little research, I’ve decided that Budge was notoriously sloppy in his translations – perhaps I will read both (I own Budge’s translation too), or I will just read the Goelet one, which has beautiful pictures.

I also acquired two math workbooks (one for each step-kid-to-be) and several board games. Because we’ve noticed that both kids sit like zombies either on their tablet or in front of the TV for almost an entire day every day if you let them, we have decided to institute screen-time rules so that they will do constructive or educational stuff. Or at least stop zombifying in front of a screen for 12 hours straight. They will get 3 hours of screen-time daily (TV in the morning till 8, and then 2 hours of tablet time) before they have no screen options left. Then, they can do something else (whatever they want) or they can do something constructive/educational for extra screen time. Examples would include reading, being read to, doing a math workbook, or playing a board game. The board games were suggested by M’s kindergarten teacher, who feels they are great for learning social skills, which M is currently working on. (He’s had a hard couple of weeks behaviorally, but has shown great improvement at the end of this week, when we instituted a new reward/discipline system. Hopefully it will continue to work. Not much seems to motivate him to behave; but “special daddy time” does seem to work right now.) Of course, we are also making an effort to take the kids out of home for indoor parks and such as well. This evening we will all go to an indoor trampoline arena with nephew J – if they are up to it after their road-trip back from grandparents’ house with their mother.

Saturday morning, before D&D A and I bought a new Outback to replace his 13 year old car. We also got a bike rack mounted on the back – so now this summer we will be able to go on bike rides with the kids. 🙂

We also bought new Samsung Halo phones. They are a step up from our old iPhone 5s which had slowed down unbearably after Apple pulled their jerk-move, “sacrificing processing time for battery life” (in other words, slowing down the older phones so that everyone would have to buy new ones). Yes, they said that people with older phones could get a discounted ($50 off) a battery replacement to speed the phone up again, but we didn’t qualify because that only goes back to iPhone 6. So we were just out of luck. Which means we are angry at Apple and decided to get Samsungs instead. Of course, this also means that Apple has hijacked any messages sent from iPhones after my switch. I’m sure they have an excuse for why that’s in my best interest. Except one, I’m still reading the same books with the same motivations as last week: I Stop Somewhere – Negalley ARC, No one Cares About Crazy People (edification), Freeing Your Child From Anxiety (hoping to help D cope), When Breath Becomes Air (Wellcome Trust Bookprize 2017 Longlist), Fablehaven (to the kids), The Island of Doctor Moreau (literature study).

Have a nice week everyone!

This week had its ups and downs. I was dealing with a sick step-son-to-be (presumably the flu) most of the week, and didn’t get any exercising done. Which, of course, isn’t new for me, I’m trying to START exercising, which is the hardest part. The good things are: Monday was my fiancé’s birthday. My step-daughter-to-be baked him a strawberry shortcake – his favorite dessert. It turned out pretty amazing. 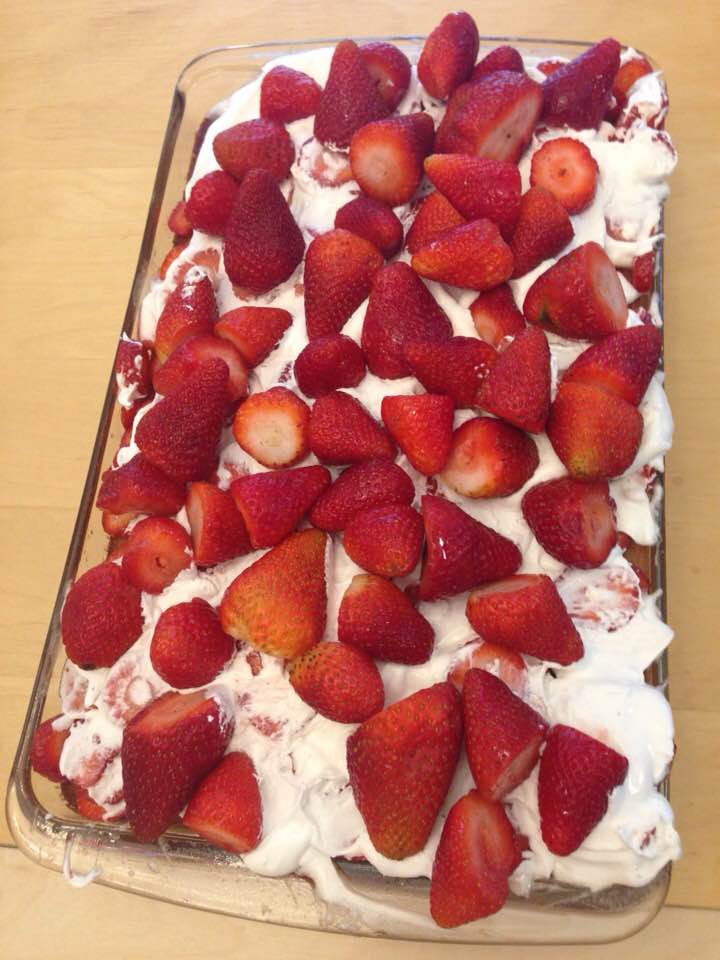 On my fiancé’s birthday, we also went to a big indoor park with my family and then we all went out to dinner. Turned out to be an excellent birthday.

This week, I started reading Fablehaven, by Brandon Mull to the kids. I think part of the attraction of being read to is sitting in my bucket chair. They insisted that the topper picture be posted on my blog. 🙂 I set aside my studies of Don Quixote for a little while in hopes of renewing my interest with a palate-cleanser, so I started studying The Island of Doctor Moreau instead. I will use the strategy outlined by Susan Wise Bauer in The Well-Educated Mind. I set aside Storm of Swords for a palate-cleanser, so I’m reading Rachel Cain’s Ink and Bone instead. I started reading of the ARC of I Stop Somewhere by Te Carter. Caesar’s Last Breath is my next book club book. The other two books I’m reading for my own personal edification. 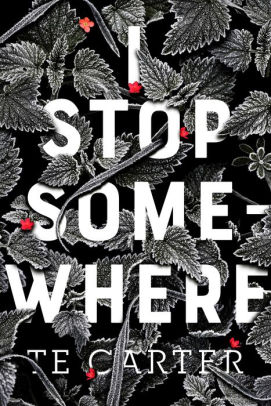 I decided to check out what sort of power I had at NetGalley now that I’d started a new blog, so I requested a bunch of books. The only one approved so far is I Stop Somewhere, which I’ll review next week. I’ve been rejected by three books, so apparently my pull isn’t what it once was. 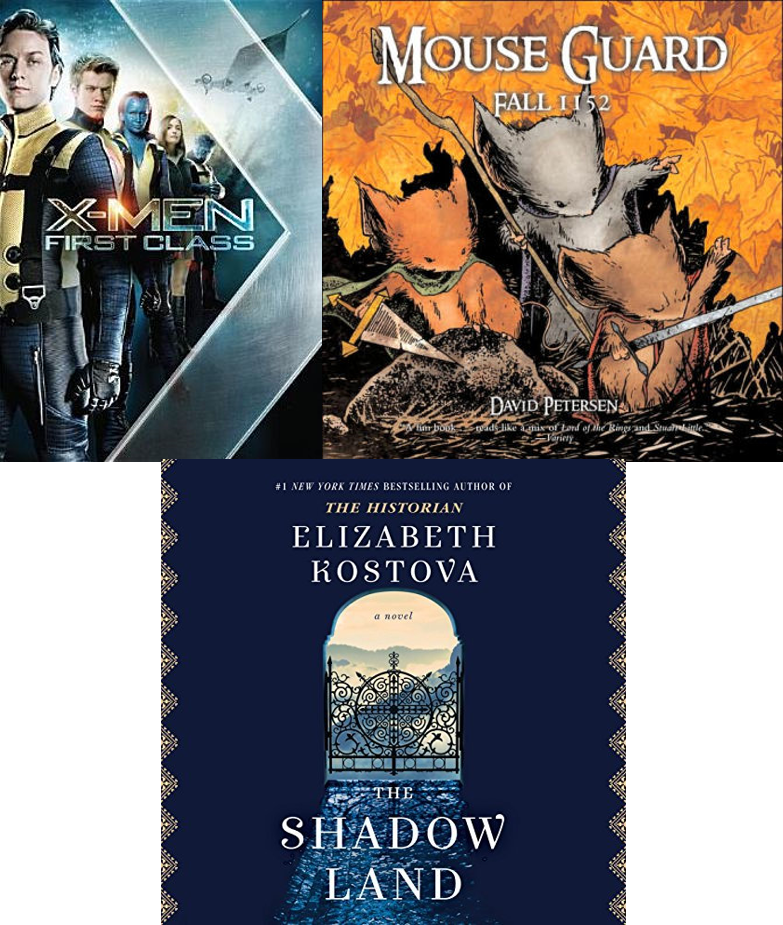 I watched X-Men: First Class with my nephew and fiancé, and finished Mouse Guard: Fall 1152 (personal edification) and The Shadow Land (next weekend’s book club).

I reviewed Incarceration Nations, by Baz Dreisinger, published notes on lecture set one, two, and three of the University of Michigan’s Teach-Out: Democratic to Authoritarian Rule, and posted about my reasons for setting aside Don Quixote.

I hope everyone had a happy Valentine’s Day week. I did. I even spent it with someone, which is rare for me. My fiancé wasn’t as much of a fan of the Viking Blod as I was, but he loved the chocolate covered strawberries.

This wasn’t a great reading week for me as I have been drifting between hypomanic and depressed all week. However, the incumbent insomnia inherent to bipolar disorder meant I had plenty of time to listen to my audiobook while silently sitting, sulking away in the dark. As selfied here: 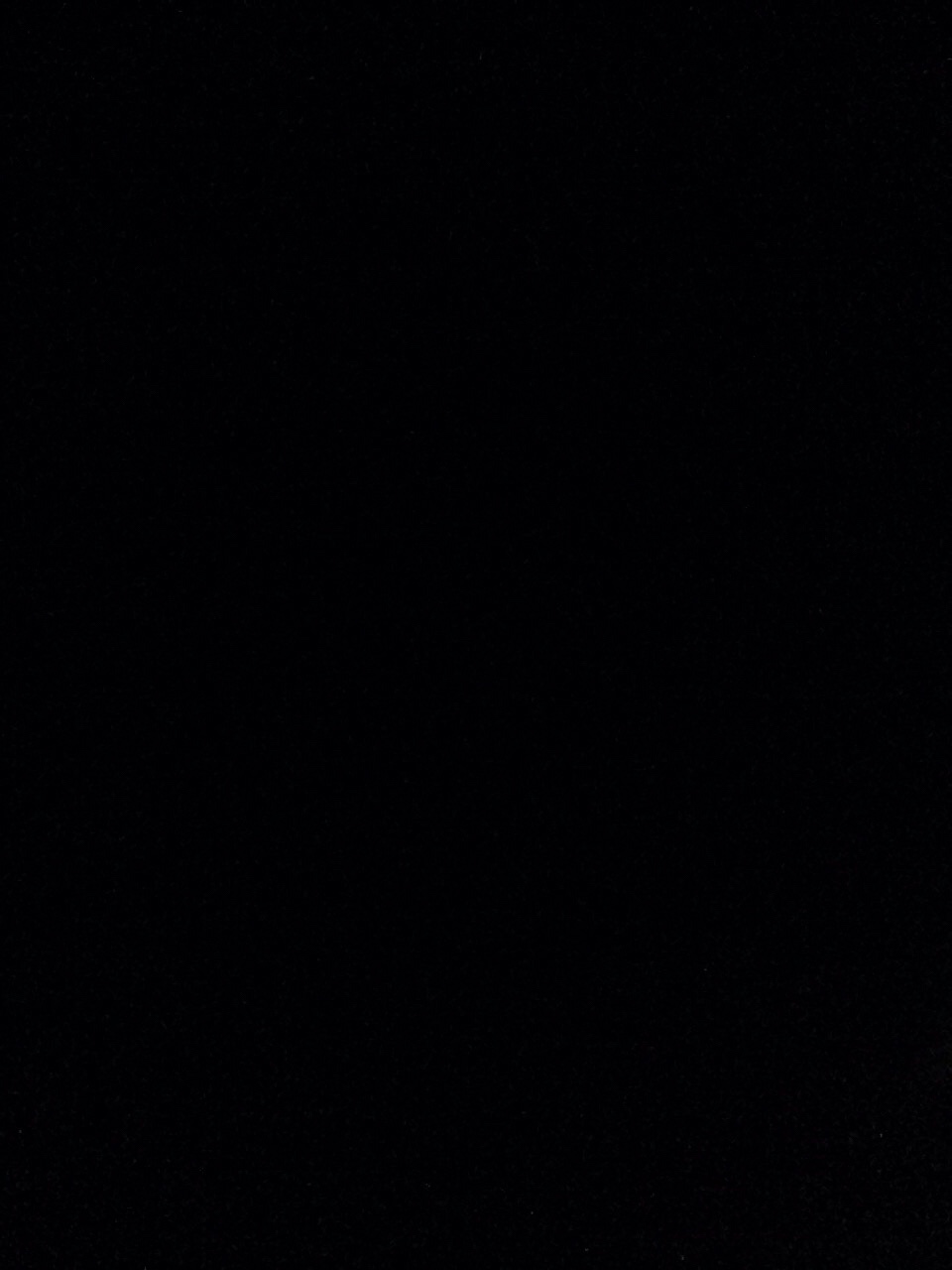 Yup, that’s me listening to Shadow Land, while trying to fall asleep without waking up the fiancé.

And these (the words you’re reading) are me writing while hypomanic in the middle of the night. Ah, mania is so fun. I wish it weren’t unhealthy. Alas!

My step-daughter-to-be and I baked cupcakes on Thursday, while watching Frozen:

This week I have finished 0 books. But I watched: My step-children-to-be, nephew, fiancé, and I watched Wonder and played Apples to Apples Junior as part of a family night last Sunday.  Wonder was an amazing movie. The fiancé and I watched Bridget Jones Diary on Valentine’s Day. And the fiancé, nephew, and I watched X-Men Origins: Wolverine on Friday night after the kiddos went to bed. That was a sucky movie, but since we’re watching all the X-Men movies in order we had to check it off.

I am currently reading:

Please forgive this and a few more reposts from my old blog, which I’m slowly seeding into this blog for the sake of continuity on this blog.
I’ve always wanted to hike the Appalachian Trail. Big dreams – out of shape woman. (In my defense, I used to be in much better shape, but those days are gone.) So instead I’m going to hike it in my mind, as I try to lose weight for my upcoming wedding. Unfortunately, as well as being out of shape, I’m recovering from leftover breathing problems from the flu, so it may take some effort to start really moving.
Daily goals:

Longer term goal: get to 140lbs by the end of December

What I will do is keep track of how many “miles” I travel on my exercise bike, and log it as if I were hiking the Appalachian Trail. I will start on Springer Mountain in Chattahoochee National Forest (Georgia). I’m at altitude 3771 feet. 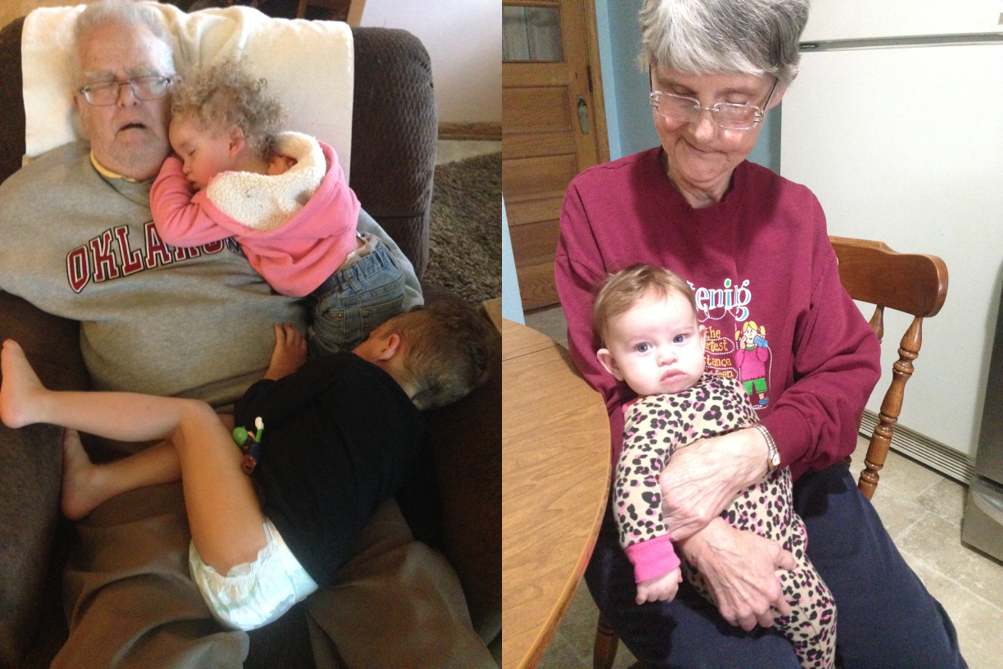 Until recently, I’ve been living with my parents – helping them when they needed it. But now it’s time to move on: I’ve moved in with my fiancé and am slowing transferring my books from their house to his. This week was very productive in working out some details in how my sister and I will keep my parents safe and happy now that they are living alone. It was a good week for getting stuff done. It was also a good week for my step-children-to-be, who have been in Disney World for the week – though my heart goes out to their mom who must be exhausted!

This week I completed:

I acquired no new books.

I am currently reading:

I’m about 500 pages into the Storm of Swords tome, and will probably take another palate-cleansing break at about page 750. I just started No One Cares About Crazy People as my general nonfiction and Freeing Your Child From Anxiety as my adulting book. I also just started listening to The Shadow Land for my real-life book club, and am studying Don Quixote in my Well Educated Mind project.

This update is posted in the Sunday Salon and Caffeinated Reviewer’s Sunday Post.

Welcome to Hibernator’s Library! This year I am beginning a new life. I’m getting married, beginning to raise my two new step-children, and being a homemaker for the first time in my life. I have explored many options for a career, and somehow being a homemaker right now feels right to me.

I have been a book blogger on and off for several years, but the reason I’m making this sudden leap to WordPress is that I’d like to try out freelance proof-reading and editing. So I decided to (yet again) start a new blog with a new feel to it. This blog will feature mainly book mini-reviews, but will have some personal notes on a bi-weekly basis. So welcome readers, old and new!